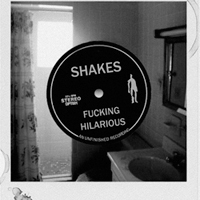 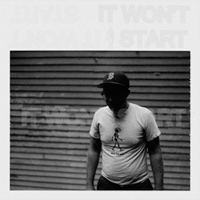 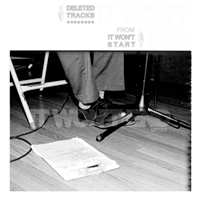 I am happy to be writing about the release of two amazing albums by Shakes (project of my dear friend Andy Szymcik) called FUCKING HILARIOUS & It Won’t Start, the latter coupled with a third album of outtakes, titled It Won’t End.  I interviewed Andy last year for Demo Mirror about his prolific songwriting and less-than-prolific sharing of the outcome.  I asked him why we hadn’t heard the material when he hinted at the existence of these albums and more like them.  It seems he’s always been in a state of trying to perfect the songs, in limbo with a band/without a band, never quite able to record them properly or do them justice due a multitude of circumstances.  And so they’ve sat on a hard drive somewhere, hidden from the world, occasionally making an appearance on his MySpace page.

Now, finally, we get to hear what’s been going on all these years in the land of Shakes – and it sounds fucking great!  Yes, the albums’ songs are admittedly unfinished, “riding the line of finished and demo recording” as Andy himself indicates.  But I love this stuff.  I’ve heard these recordings sporadically over the years, a few I haven’t heard at all, and certainly never as a complete entity.  It is so great to see them in proper context, in a running order.  I don’t care that they’ve been a long time coming, that they’re rough around the edges – I’m just glad they’re here.  These are truly special songs.

FUCKING HILARIOUS contains songs that are personal favorites of mine, spanning from 2003 to 2005 – Somebody Hates Me Up There, To Australia, In A Hot Flash, Talks With Strangers, (Meanwhile) – just to name a few; great songs that 7 years after I first heard them still play in my head… everyday… without fail.  Pretty crazy.  I’m glad we all finally have them to listen to forever.

The songs from It Won’t Start span from 2005-2008.  They are generally of a higher quality recording-wise, and of the highest quality songwriting-wise. Wow. Ranger Is My Middle Name, Talker Texas Ranger, Watered Down, S-T-O-P, What’s Your Story? Holy fucking hell!  I might as well just mention the entire track listing.  I’m not even sure what to say about this one, it’s that good.  Andy knows how to write a song and make you feel it.  I dare you not to get goosebumps.

To boot, he’s included a 3rd album of outtakes from the It Won’t Start era, called It Won’t End.  This contains some fantastic material, which has remained elusive until now.  Some of the best quality recordings can be heard here, like Jump Out the Building & Cancelled Plans (UK Surf).  A lot of meditative songs are featured on this one and a rare live track Care Barely’s (Rare Bears) sounds great.  What do you say when even the outtakes are this brilliant?

The best part?  All the albums are $5 each!  You can listen to all the songs and choose your price over at Shakes’ Bandcamp page.  While there is a $5 suggested price, I highly recommend you just give him all your money.  Really, just fork it over.  All of it.  I’m not sure he’s in it for the money, but it’s the least we can do to thank him.

Right now, I’m getting a little emotional listening to the FUCKING HILARIOUS bonus track Get Ahead (Then We’ll Talk), recalling the (only) time Andy played this recording for me in his room years ago.  I was so moved.  It’s so intense, I can’t help but get misty.  I’m pleasantly surprised to hear it included here.

I hope everyone checks these albums out and appreciates not only the charm of the recordings, but the moments of greatness that lie in between the tape hiss.  Shakes, even in it’s rawest form here is potent, powerful, and nothing short of inspirational.